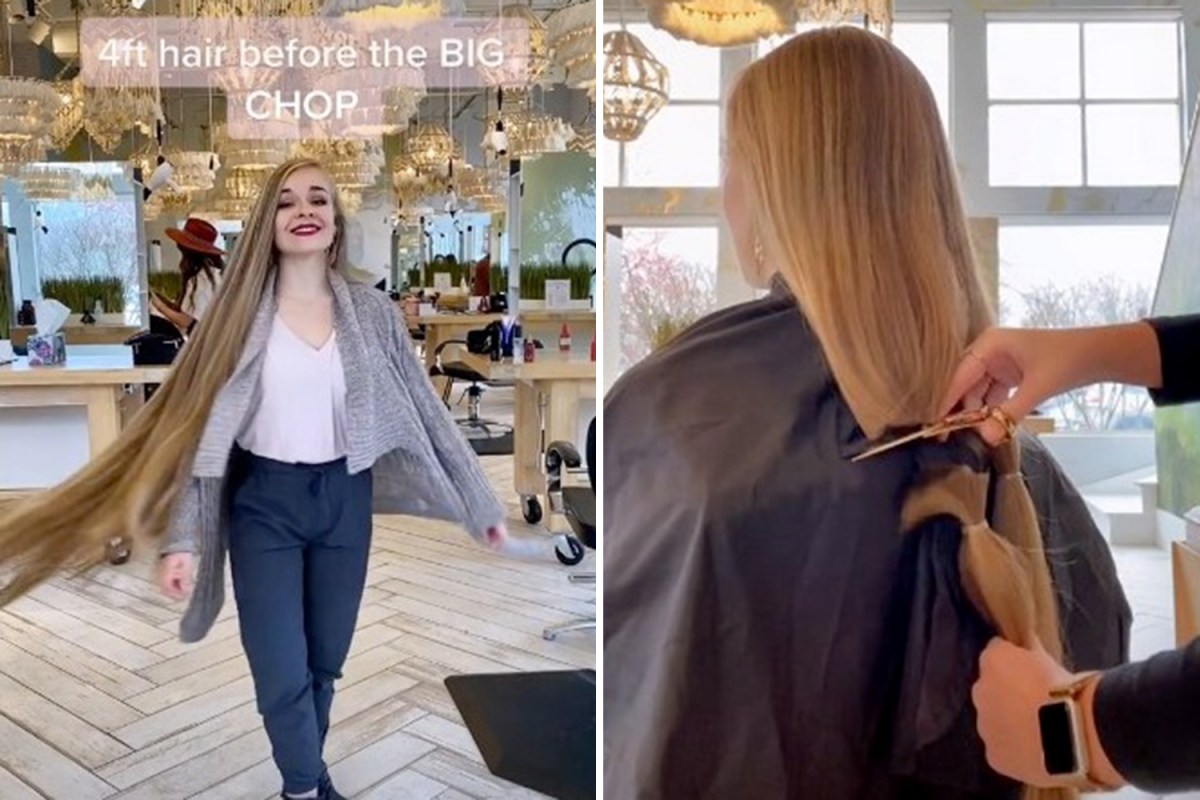 Woman happily recounts how she cut her 4ft hair, but everyone is focused on something else

A WOMAN who could be compared to a real Rapunzel thanks to her long golden locks has decided to cut 4 feet in length from her luscious mane.

While seeing so much hair being removed from someone’s head can be shocking, people are focusing on something completely different shown in the video.

The woman, a stay-at-home mom named Vanessa Rasmusson, shared her shocking haircut in a video posted to her TikTok page.

“The barber did a horrible job with those dull scissors!!!!!” someone knocked.

“All that money tied up in chandeliers,” wrote a second person, commenting on the many macrame-style light fixtures hanging from the ceiling in the living room.

“They need to sharpen those shears.”

Yet another person agreed, writing, “Looks like they needed [to be] sharpened before cutting her beautiful hair.

Others wondered if Vanessa had donated her hair or not, and if so, why her hair hadn’t been braided before it was cut.

The stylist in the video simply parted her hair into two ponytails, which upset some viewers.

According to Byrdie, however, hair should be parted into at least four sections with rubber bands, as one ponytail or braid can cause up to 4 inches of hair loss.

In a response to a concerned user, Vanessa said she had indeed donated her hair and if she had known better, she would have asked her hairdresser to cut her hair differently to make it easier for the wig makers.

Either way, Vanessa seemed beyond thrilled with her new hair length, despite having long hair for most of her life.

THE GUT INSTINCT THAT LED TO THE CUT

In a video leading up to the big hair reveal, Vanessa explained that she hadn’t cut her hair since she was seven years old after absolutely hating a haircut she received.

“I said I would never do it again and I hated it, I didn’t want it to be short,” she recalled.

However, in recent years, she has realized that her hair is no longer practical.

“My long hair has served me well, but it no longer serves me.

“It causes me more resistance in my life,” Vanessa explained, adding that the frustrations of it changed her personality in ways she didn’t like.

“I think it’s time to change to try something different, to let go of that identity,” she added.

In another video, she explained that part of the disappointment with her hair started when she started dancing again and likened it to having a second head to carry around.

And in yet another video, she admitted it wasn’t “realistic” to have such long hair with a growing family, a dog and constant chores to do.

Luckily, her hair issues are no more, as Vanessa said she loved her new hair and was even left speechless when she first saw her new style.

For those with long hair who aren’t looking to cut it, a woman has revealed what people commonly do wrong that causes hair to break and therefore prevents growth.

Do you have a story for The US Sun team?