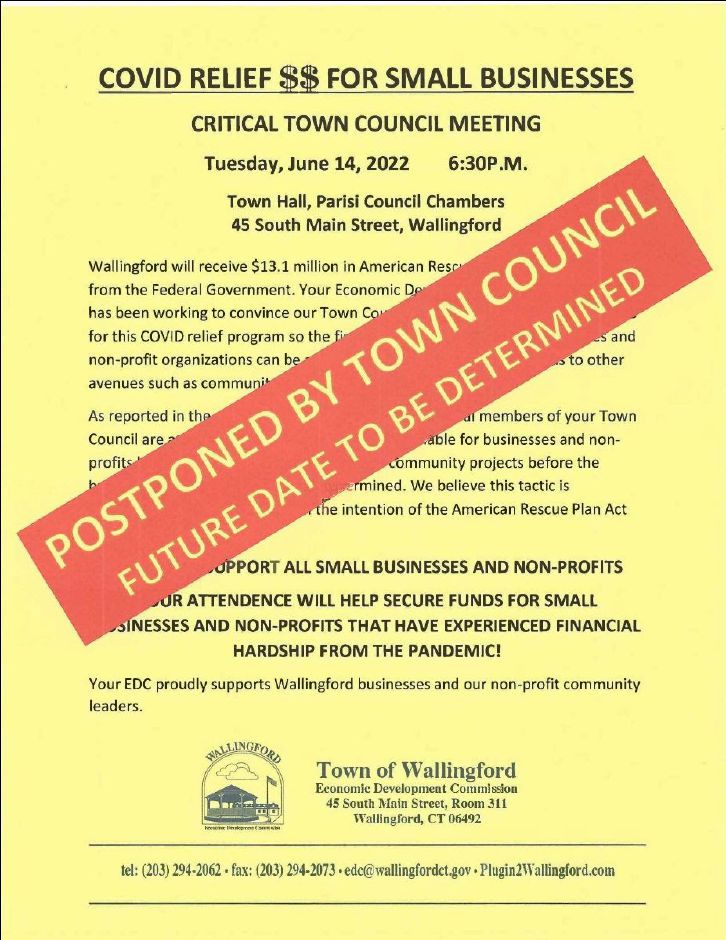 WALLINGFORD – The City Council will consider launching an investigation into the Economic Development Commission after the EDC circulated a leaflet questioning the council’s process for allocating $13.1 million in federal pandemic relief funds .

Councilors say the leaflet misrepresents the work done by council to allocate the funds, while EDC members say it was intended to provide more clarity to businesses and elected officials.

“As reported in the media and as you may have read, several members of your city council are trying to cut funds available to businesses and nonprofits by allocating large sums of money to community projects. before the needs of businesses and nonprofits are determined. . We believe this tactic is misdirected and inconsistent with the intent of the American Rescue Plan Act funds,” the flyer reads. .

EDC President Joe Mirra said the flyer is meant to get companies more engaged in the ARPA process and impress on the board the importance of following the roadmap of assessing the extent of needs in town through application guidelines being drafted for businesses. and non-profit organizations to solicit a portion of the funds.

“I’m sorry if anyone was offended by this, but basically all we were trying to do was help them get a clearer picture of small businesses themselves to help them get that picture. “, did he declare. “…Basically, we were hoping it would even speed up the process if they heard from the business community.”

He fears the council is forgetting the purpose of the legislation behind the fund and without the voices of those directly affected by the pandemic and economic shutdown, that focus could be lost.

After EDC circulated the original flyer, an updated flyer was sent out with the words “Postponed by City Council…Future date TBD” printed over the original text in large capital letters on a red background.

Late last week, the board released a revised agenda for this Tuesday’s meeting calling for discussion of the flyer and a possible investigation into EDC. The agenda item, submitted by Republican Councilman Craig Fishbein, cites Chapter III, Section 10 of the city charter, which states that “the council, by a vote of not less than three (3) members , shall have the power to investigate all departments, offices and agencies of the city.

But another adviser, Democrat Jason Zandri, called the flyer defamatory.

Zandri told the Record-Journal that he believed the accusation that the council failed to meet federal government requirements for how the money was spent was false. He worries that ARPA’s deliberations are becoming more agenda-driven, with companies, nonprofits, public projects and other interested parties receiving a portion of the funding efforts to find the best use of funds.

“They distributed a flyer type flyer to many local businesses basically stating that there would be a discussion that would take place regarding the ARPA funds and within that…the tone of the words used in the flyer had a libelous opinion or theme as far as I’m concerned,” Zandri said.

Noting that other cities have spent their entire ARPA allocations on government projects, he said the current direction the council is heading — splitting 50% of the $13.1 million between the corporate and not-for-profit – already puts businesses first. more than neighboring communities. He added that the potential projects the city council has considered funding with ARPA money fall under both the uses the U.S. Treasury Department has authorized for the money and what other municipalities have done. .

“It indicated that we were doing something that we should not do or are not allowed to do. We are operating totally within the authorized use of these funds and for the EDC of Wallingford to suggest that anything else is at least shabby. So it’s a body that’s supposed to work hand in hand with the city council and it seems like they’re trying to undermine any action we take. So I’m pretty disgusted by this communication,” Zandri said.

Republican Councilman Joseph Marrone said he would appreciate having a conversation with the companies about the allocation of ARPA funds, but he thinks the writing and distribution of the flyer may have exceeded the limits of an open government. Since talks began about the distribution of funds, he said the mayor’s office and EDC have been pushing for more of the funds to go to businesses.

“I think what we’ve seen from the very beginning is a concerted effort by the administration to get a certain outcome,” he said. “…It’s been very diary driven and I hate to think that anything nefarious is going on.”

Mirra said that all discussions on the drafting of the leaflet took place in public meetings and that the EDC voted on its distribution in public session.

“It was at a public meeting, at an EDC meeting. It was discussed and voted on,” he said. “…If there was any misinterpretation, I’m sorry, but again, this was only done to expedite the process and give them the information these companies need to share with them.”

Economic development specialist Tim Ryan said the EDC’s aim was to make clear the importance of ensuring that a portion of ARPA’s funds are dedicated to helping the economy recover.

“If you are a delicatessen or a hairdresser or a small manufacturer, your impact of Covid is different, potentially different, and we felt the council would benefit from hearing some of the stories we hear from small businesses,” a- he declared. “…EDC’s position has been the right one from the start: we believe that our role is first and foremost to support businesses. That’s why we’re here, so it should come as no surprise to anyone what we do.

Ryan said it was both important that companies’ experiences were considered by the council and that companies were kept informed of the process and the possibility of them receiving relief funds.

“In most cases, frankly, companies are unaware of the status of the council’s discussion and frankly, those who think they might be entitled to help are glad we approached them,” he said. he declared.

After discussing the ARPA enforcement guidelines at its May 10 meeting, City Council voted 6 to 3 against finalizing the drafts in order to continue making revisions. Republican Councilors Autumn Allinson, Council Chairman Vincent Cervoni and Laffin voted to finalize the candidacy guidelines.

Zandri said some advisers wanted to see the maximum number of employees a company could have to qualify lowered and a cap on how much an organization could receive added. The discussion also focused on the preference given to companies that would use the money for a “forward-looking” recovery rather than recouping past losses.

Ryan said he’s heard some frustration from businesses with the city’s slow ARPA deliberations, but he said it’s important the city takes a measured approach to ensure the money is spent transparently and in the most impactful way.

“The council is doing its job and I like to think we are doing ours with them,” he said, “and we look forward to working with the council on an outcome that works for everyone who has been affected by covid.”

Journalist Devin Leith-Yessian can be reached at [email protected]

The evolution of Karine Martins’ style in pictures