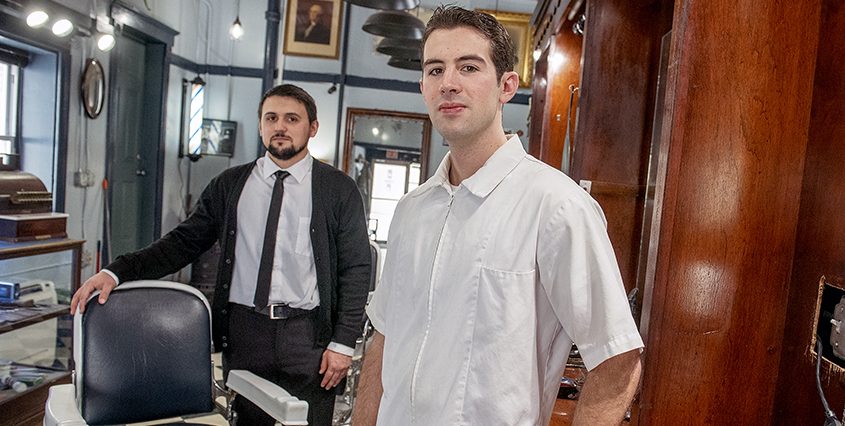 Everett Kendall Flint got his first haircut while in college. His older brother Ellis had had enough of the same old fashionable haircuts their father gave to the five boys in the family. There are 10 Flint kids in total, and their dad, Joseph, just needed the toppings to be efficient and cheap.

But Ellis wanted to have his hair spiky, like the men on “jerseyshore“, said Flint. So when their father was at his welding job one day, Ellis asked his younger brother to use their father’s barber supplies to do his hair. Everett Flint suspected that their father would be crazy, but he took out the gel and the trimmer anyway.

“I was a little surprised,” Joseph recalls.

Everett recalls the reaction being a bit stronger.

“It was the first and only time he was angry,” Everett said.

Yet when the family needed a haircut, Joseph asked his school-aged son Everett to cut his hair.

“And I’ve cut my dad’s hair ever since,” Everett said.

In fact, Everett, who is still only 28, has cut a lot of people’s hair since. At large family gatherings, he said he would bring a backpack full of barber supplies and set up a chair in the corner, cutting hair all day.

“And my family would bring me a plate of food at the end. I swear it,” he said.

During his high school days in Amsterdam, Everett said he had a facility in the family home and cut the hair of his brothers, “cousins” and friends at the rate of about five cuts a day.

So maybe it was inevitable that Everett would become a professional barber. He studied at the American Barber Institute in Manhattan, then worked as a barber in New York – where clients included rapper G-Eazy – for three years before opening his own store, Everett Kendall hair salon, on Amsterdam’s Market Street when he was 21 in 2015. After closing for two years due to the pandemic, the store reopened last month – weekdays 12-6pm – with the hiring of a new barber and fellow Amsterdam High, Bryan Stanavich, aged just 24.

But Everett doesn’t necessarily view his journey as destiny. Although he wouldn’t go into detail, he said the crazes of youth were a bit too close.

“Barber really helped me a lot. If I hadn’t done barber, man, I could have easily gone down the wrong path,” Everett said. “It helped me stay out of trouble, communicate with people and earn some money.”

His uncle Justin said he had lived a full and useful life, including working for the FBI, but also suffered from alcoholism, which led to a liver transplant due to cirrhosis.

“I’ve been drinking all my life. You think you can just go on and on. But ultimately it took its toll,” Justin said.

So when Justin looks at his nephew, he sees a young man he admires.

“I live vicariously through him now,” Justin said. “I’m proud of him. How quickly he did it. That’s how he took off.

WRAP HEADS AROUND THE IDEA

Although he saw his son’s talent as a barber, Joseph was initially unsure whether starting a business was a good idea for his fourth child.

“I was a bit against it. I thought it was a lot for his age to take out a loan. I wasn’t totally against it, but I didn’t like it,” Joseph said. The father always helped his son, and now Joseph says, “He was right, though. It was good business for him.”

Even though Joseph wavers on the general idea of ​​the barbershop, the aesthetic his son chooses is more certain. Without necessarily describing his son as an old soul, Joseph said Everett had always been drawn to the classics.

“It seemed like he was always gathering with the old people. At all parties, he would always sit next to old people and talk,” Joseph said. “Maybe he just thought it was more interesting to talk to older people.”

In 2015, Everett purchased and renovated a vacant 1890s storefront on Market Street. The 1930s-1940s vibe inside the barbershop perfectly matches Everett’s affinity for antiques. The shop features a pewter ceiling, dark oak bar, black and white checkerboard floor and a display of early 20th century personalized shaving mugs that customers would keep in a barbershop to use for mixing cream to shave and hot water at each visit.

Although the salon doesn’t use the cups, it still offers razor shaves with hot towels and hot shaving cream.

Despite Everett’s attention to detail – from the hem of his dress pants to the gel in his hair – and his obvious passion for what he does, he hasn’t always felt proud to pursue it, especially in high school.

The barber is also a good job for Bryan Stanavich. His family, which also includes 10 children, hung around the Flints, although he and Everett weren’t very close as kids. Stanavich was four years younger and he focused on sport, especially football – Stanavich was the starting running back for Amsterdam. But, even though Stanavich and Flint weren’t buddies, Stanavich knew about Flint’s barber skills. So when Stanavich started cutting his fellow soldiers’ hair while serving in the US military — ordering his own supplies from Amazon — he turned to Flint for advice. From base Fort Riley in Kansas and then Europe, Stanavich watched Flint’s YouTube videos and developed his own skill. As his active duty came to an end last year, Stanavich texted Flint to ask if he could help out in the barbershop.

Now he’s back in Amsterdam to get his license under Flint’s tutelage. Unsurprisingly, Stanavich said his specialty is the high, tight fit.

Flint said he’s looking to hire another barber-in-training, and he welcomes any applicants who think they can make the cut.

Stanavich said it was important to work at a separate company from his hometown.

“A lot of old guys come in and say it’s good to have a barber shop in their town. They like to come to Market Street, talk, get their hair cut. They love it,” Stanavich said. “They look at the ceiling and smile.”

Dan Fennessey is a regular.

“I like the atmosphere of an old hair salon. You feel like family when you go there. You remember the good old days, tell stories. And you can talk about anything,” he said. “We’re talking shop, we’re talking cars, we’re talking people. It’s just a cozy place to go and get your hair cut.

“He was ambitious back then and showed that ability to start his own business, and here he is,” Fennessey said. “It’s not uncharted territory that I see some of my students in workplaces in Amsterdam, so that makes me really proud. In small towns like Amsterdam, we have to keep those kids local and give back to the community.

More from The Daily Gazette:

Black-owned hair brands to buy in February and beyond

Back to Blonde: A Personal Essay