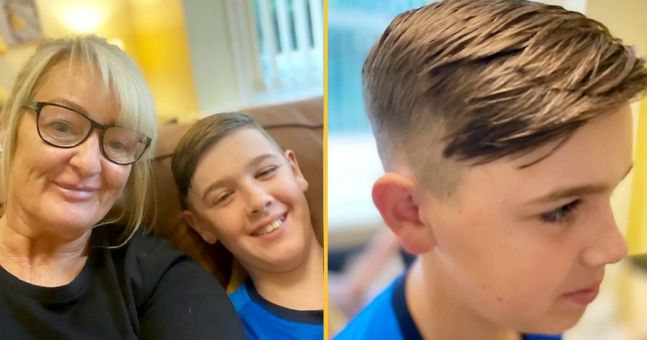 A 12-year-old schoolboy has been placed in segregation because his new haircut was too short.

Jayden Barratt had his hair cut before the start of the new term, his hair shaved on his back and sides.

But her school – Our Lady’s Catholic College in Lancaster – has a rule that hair shouldn’t be shorter than a number two.

Less than an inch of his hair at his neck, however, was shaved to a number one. The school therefore deemed him too short and he was placed in an isolation space to do his work.

Jayden’s grandmother, Judith, is now considering sending her to a new school.

Less than an inch of Jayden’s hair has been cut at number one (Credit: SWNS)

Jayden has been placed in segregation to do his homework (Credit: SWNS)

Judith, who takes care of the 12-year-old, said there was “absolutely nothing wrong with her haircut”.

She said: “This situation is horrible. I am flabbergasted. They are there to educate her and not to judge her hair.

“He hates having his hair cut, but agreed to do it so he could be smarter for school.

“When he got home he was in such a mess emotionally because he thought he had done something wrong.

“If it was hot pink I could understand it, but there is absolutely nothing wrong with her haircut. I would say eight out of ten boys have this haircut.”

Jayden’s grandmother said her grandson was an ’emotional mess’ after the incident (Credit: SWNS)

According to the metro, seven boys were sent to isolation in the first week of school, where they are required to sit at desks in cubicles and stay an extra hour after school.

Judith added that the other lone boys “supported” Jayden and told him his hair was beautiful.

The principal of the school, Helen Seddon, defended the policy.

She said: “At Our Lady’s we have a uniform policy that covers the hairstyle and we enforce it.

“This policy has not changed and can be found on our website and in the student schedule. If a student’s haircut is shorter than our expectations, he or she spends two days in our internal exclusion unit where students can complete their schoolwork with a staff member present to support them.

“We are making reasonable adjustments for students with additional educational needs and believe we have done so in this case.

“Jayden’s family choose to keep him at home. We don’t stop him from going to school, for his education, and we encourage them to make sure he’s back to school. “