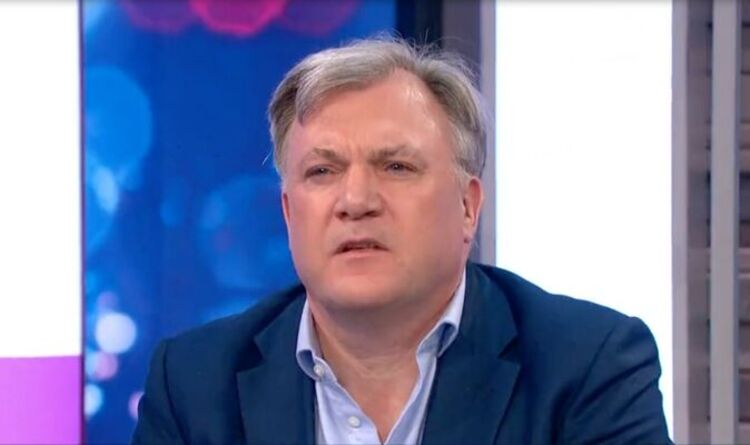 Former Shadow Chancellor Ed Balls slapped Tony Blair during an appearance on ITV’s flagship political show at a time that drew laughter from fellow guests. Mr Balls made the off-the-cuff remark during a commercial break in a clip posted to Peston’s official Twitter account.

In the clip, ITV’s Anushka Asthana asked the former Labor MP for Morley & Outwood if Mr Blair had been called by someone claiming to be then Tory leader William Hague.

However, a bewildered Ed Ball hesitated before wondering if the image shown was Mr Blair at all.

He said, “Is it Tony Blair or Gandalf?”

Responding to Ms Asthana, Balls added: ‘Wrong, no idea, I was so puzzled by the picture I couldn’t get past it.

Gandalf, a key protagonist in the hit ‘Lord of the Rings’ film series, sported an iconic gray hairstyle during ‘The Fellowship of the Ring’.

Mr Balls, who served as economic secretary to the Treasury under Mr Blair, was far from close to the former Labor leader during his decade in Downing Street.

In 2011, four years after Mr Blair left office, he denied involvement in the so-called ‘Project Volvo’ plot to oust the former prime minister from Number 10.

Mr Balls had been an ally and economic adviser to Mr Blair’s chancellor and eventual successor, Gordon Brown.

However, her comments on Mr Blair’s Covid barnet last night showed a more jovial side to their relationship.

The former Strictly Come Dancing contestant is not the first to question Mr Blair’s lockdowns.

Mr Campbell, who worked as Blair’s director of communications and Downing Street press secretary from 1997 to 2003, asked the ex-Prime Minister: ‘Can you explain to me how you dared to make a TV interview sounding like Alvin Stardust or Gerry Francis?”

Co-host Susanna Reid then made the exact same Lord of the Rings comparison as Mr. Balls.

Blair replied, “Well, Gandalf is better than some of the things I was called as a result of there.

“Listen, it was confinement, it’s done, it’s over.”