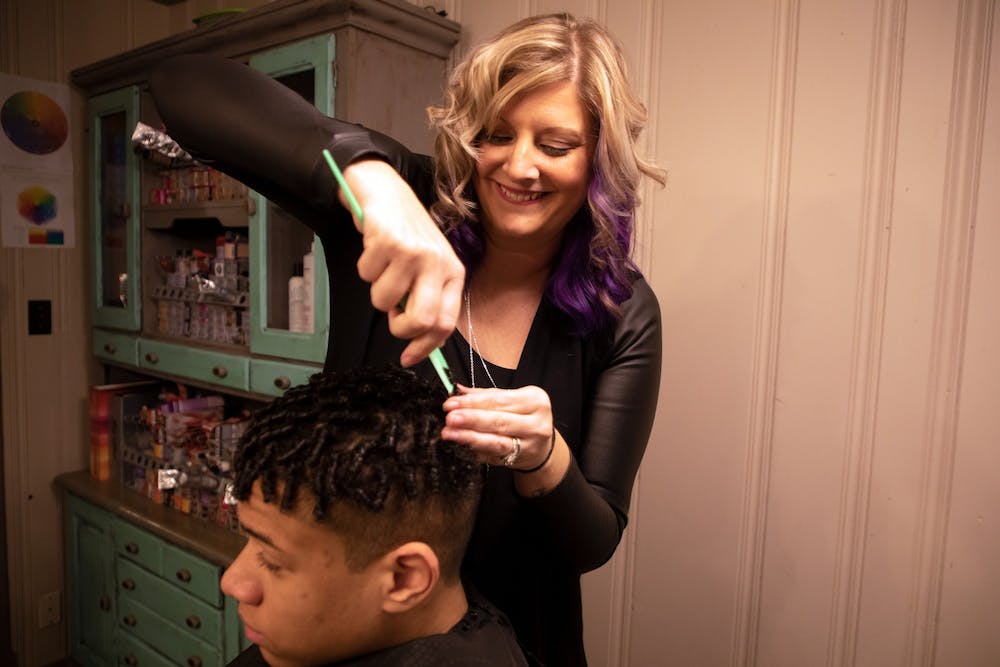 In a room adjoining the kitchen of Erica Robinson Moody’s home are two lounge chairs. A cabinet is stocked with hair dyes of different colors, an apron hangs on a hook near a large mirror, and products are lined up in single file on the counters.

Her son, Brooklyn Moody, sits in a lounge chair where his mother says he often falls asleep, as she takes a comb, twirls it tightly over a small section of his hair and creates a tight curl and elastic an inch or two in length. Dozens of these loops are found on his head.

Brooklyn’s hairstyle takes 45 minutes to style this way, and the style only stays for about a week – a reality for biracial hair.

Erica is a stylist, and while styling the hair of Brooklyn and her daughter Ayreonna might seem painless now, it wasn’t always that way. While growing up in Brooklyn, Erica didn’t have as much education on textured hair, with only one chapter of her beauty school textbook focusing on it.

After learning how to style biracial hair through advice from colleagues and family, educational resources on the internet, and experience with her own children, Erica decided to lead a new class in her salon. Her first An Education in Biracial Hair class on Feb. 17 will focus on families and how to style the textured hair of biracial family members, while upcoming classes will help biracials style their own hair and teach stylists how to style textured hair.

Through their own research, Erica and her business mentor, Heather Roundtree – whom Erica met at a Women in Business event – noticed that there were usually only white and black salons in Muncie, but no salon that could do all hair types. Erica’s husband, Neil Moody, noticed it too.

“You walk into a black hair salon and ask [the Black barber] make a certain style, and [they say, ‘I can’t do that style’] because they’re not good with scissors – they just use clippers,” he said. “You go to a white shop to get your hair done, and they don’t know how to use clippers because they only use scissors.”

Neil said he believes the only way to make everyone – like biracial and foster families – feel comfortable and comfortable asking about hair is to “to have [the hairstyling] all under one roof,” with stylists able to work with different hair types.

Kristopher Nevings, a former beauty student of Erica and one of the people who helped Erica with her classes, said he learned the bare minimum about textured hair from his beauty school textbook.

“It’s 2022, and we still haven’t seen a change or [diversification] what beauty standards and beauty schools are taught in,” Nevings said.

Erica said that when she had biracial children, she felt “in the dark”, despite being a professional hairdresser. She said she thinks having a place to talk about biracial hair, ask questions, and not feel judged would help people feel more comfortable.

For Neil, he thinks the black community is sensitive to his hair. When he was growing up, it was common to hear that if a black person allowed a white stylist to touch their hair, the black person’s hair would fall out, Neil said.

“What good did they get [is]normally, if they went to see someone white and had their hair cut, [the Black person] would say, “Just cut that”, and [the white stylist] would cut it all the way up…because it was a different hair texture [and would curl up]”, Neil said. “So it became, ‘Don’t touch my hair.'”

Ayreonna said she was “uncomfortable” with people touching her hair, and Brooklyn said people touched her hair “all the time.” He said he, and the black community as a whole, don’t like people touching his hair, but those people — in his experience, white people — don’t care.

Erica said that when her children were babies, some people would touch their hair before they even asked to hold it.

Nevings said it was “intrusive” when he experienced it as a child.

“When I sat down [in my grandmother’s] salon, most of the people sitting around were older white men, and they were just looking at my hair…they would come in and touch it without asking,” Nevings said. “Even as a kid it bothered me, but I didn’t know how to articulate it.”

Nevings believes the fact that loved ones can do their biracial child’s hair contributes to parents’ ability to teach their children to love their hair, like his grandmother did for him. He wants to be part of these classes because they allow him to help other biracial people with their hair — help he said he didn’t get growing up with a process that was difficult for him. .

“[My hair] would get so tangled. I was going wild and getting angrier and angrier as it got more and more tangled,” Nevings said. “I remember growing up I wanted to have my hair cut a certain way, but I couldn’t because I didn’t have the same texture. [of] hair like anyone else in my class, and it was frustrating for me.

Erica said Ayreonna specifically struggled with not having a lot of kids who looked like her in school.

Erica wants her classes to be a non-judgmental place where people can ask questions. She said that as she learned, she didn’t want to feel stupid asking questions and she didn’t want people to judge her, thinking she should know how to do her kids’ hair.

“I’m in a lot of Facebook groups for mixed families…but, even there, I see people who will put, ‘Please no negative comments’ or ‘I just need to positive reinforcement,'” Erica said, “because some people will bullshit about their first hairstyle or the learning process, or they think they should have used a different product or a different tool.

Roundtree saw how struggling biracial families were “very emotional” about their stories. Being a mother herself, she would feel “like [she] was kinda failing” if she couldn’t do her kids’ hair, and she finds the hope Erica gives to families the most impactful, she said.

“To see the excitement and the hope she gives people in something [as] small like being able to fix their kids hair…brings me to tears every time because if you can give someone hope…you can change their whole life,” Roundtree said.

With the other two versions of the class, Erica plans to continue her efforts to change the beauty industry by learning how to style “so many people who don’t look like [her] as possible. She said biracial hairstyling classes are “just the tip of the iceberg.”