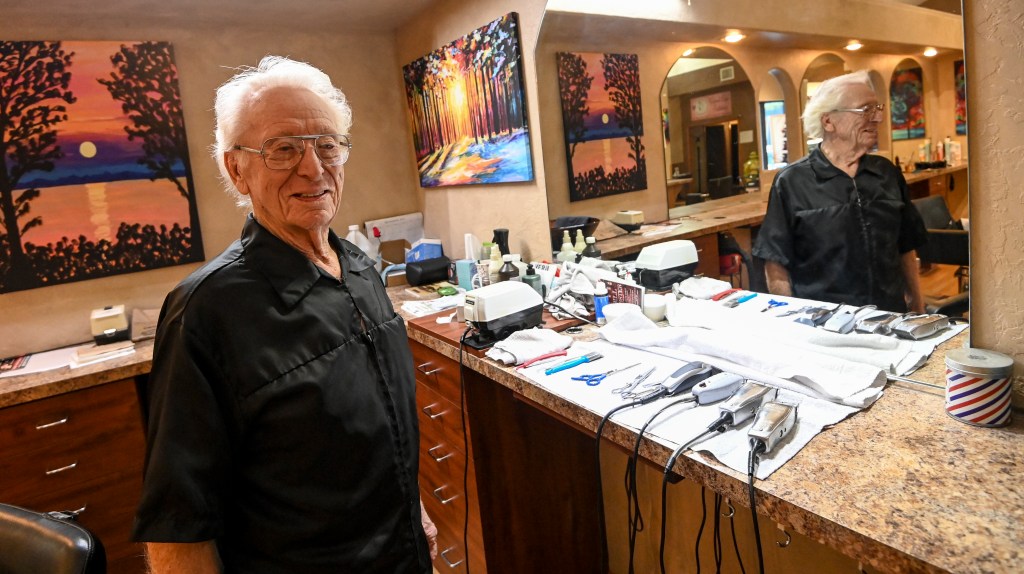 A nearly 90-year-old veteran and barber remains a fan favorite in the community, proving he will never go out of style, just like one of his famous haircuts.

Vern Dietz, a beloved hairdresser at Gwen Salon in Greeley, celebrates his 90th birthday on October 8th. For more than three years, Dietz has spent his Tuesdays, Wednesdays and Thursdays from 7 a.m. to 5 p.m. working in the salon.

Dietz has his fair share of regulars who stop just for one of his hairstyles. He’s even had some of the same clients for over 50 years, he said.

Before opening her own salon, Gwen Arguello and the popular veteran had worked together for 16 years in a different location. By the time she started working in the old store, Dietz was already a permanent figure in the community and a legend in the haircut world.

“I’ve known Vern since I was little,” she said. “When I was in beauty school, I went to her old store and looked at her because it’s just a legend.”

The two have become more like a family after years of learning from their experience and growing in business together, according to Arguello. The most rewarding thing about knowing and working with him is learning wisdom from his life.

“Learn all aspects of life, not just the business, but just its positive attitude,” said Arguello.

Dietz began his journey to become “The Man, The Myth, The Legend” when he moved to Greeley in 1958. He began his long-term career cutting the hair of thousands of people during those 60 years. and more.

He loves all aspects of the business, but has a strong passion and expertise in men’s haircuts, said Dietz.

“I appreciate it,” he said. “I love to see the guys come out of here with a nice haircut.”

His love for the men’s haircut stems from his childhood experiences and his time in the Navy.

Dietz spent the first 18 years of his life on a Kansas farm where he first discovered his dream of becoming a barber. As a teenager, he cut his hair when families got together.

“You know it’s interesting, I guess it was just my natural calling,” Dietz said. “Yes, I tried a few other things but it never worked, but I always went straight back to the barber.”

Although his mother wanted him to pursue barbering school because of his talent, Dietz moved to Denver to earn a living building houses with his uncle. After 6 months of work, the Korean War broke out, so he decided to enlist in the navy.

For four years, Dietz had the opportunity to serve his country and do what he loved most. He worked as a barber on a Navy ship that operated five days a week for eight hours a day.

“So I came to Denver and that’s when Uncle Sam called me,” Dietz said. “I had a good four-year race.

Even with Dietz’s barber career stretching back to the early 1950s, Arguello described him as a “young” person that everyone loves and gets along with.

“He’s ageless,” she said. “He’s in better shape than the rest of us, really. He is always happy. And he’s very talented, he still has it. I think we’re all honored to be able to work with Vern. It is a privilege.

From his teenage haircutting teenager to his current salon job, Dietz has continued to follow his calling in life. He’s become a face everyone loves to see, a person everyone can’t wait to talk to, and a barber who everyone wants a haircut.

And he has no plans to quit anytime soon.

As a man of almost 90 years, people are always impressed and shocked by his work ethic. Dietz has one thing to say to these people:

“As long as the good Lord leaves me and as long as he keeps me standing and the skeleton system is working,” Dietz added of his plans to continue working as a barber.

Dietz wants to continue to “live on a daily basis” for this next year of his life. When asked if he was excited about the upcoming step, he replied, “Not really, it’s just another day.”

“Become pink for my family, my friends, my sisters”