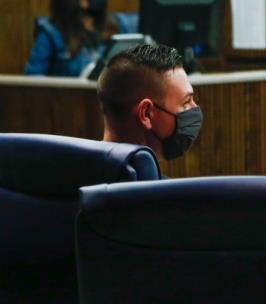 Benjamin Brown testified on Friday in his case where he is charged with the first degree murder of Annie Shell in August 2018, denying harm to the child who was almost three years old.

The Brown trial lasted until late Friday evening to complete the testimony of witnesses. Defendant Brown testified with his story about what happened to Annie while she was in his custody.

Brown said his girlfriend Brandi Gianunzo was supposed to babysit Peyton and Annie Shell, but went to a hair salon instead. Brown said he watched the children until Ms Gianunzio returned. He said he was on the phone with his father while watching the children.

Brown said he told her to get on the couch and her legs gave out and then she fell straight to the floor. He said she started convulsing. He said he did not call 911, but called Ms. Gianunzio and her father first. He said his father advised him to call 911. He said he didn’t call the authorities because he didn’t know Annie’s information.

Instead, Brown said he put his thumb in Annie’s mouth to keep her from biting her tongue. Brown said Ms Gianunzio ran into the house and took Annie outside while calling authorities. He said he lied to the police saying Ms Gianunzio was at home the whole time. He said they followed the ambulance to the hospital where Annie spent the next 12 days until her death.

Prosecutors criticized Brown during cross-examination with questions about “all his lies” throughout the trial and discussions with authorities. Brown admitted in court that he lied about Ms Gianunzio’s whereabouts while giving evidence. State prosecutors said he lied about several other things regarding prior statements. Prosecutors also questioned why Brown did not call the police. Brown said it was because he didn’t have enough information about Annie.