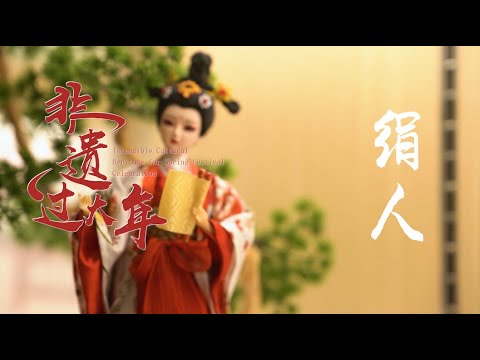 “Silk thread for the skin, silk for the hair” is a vivid description of beijing silk figurines. It is one of China traditional craftsmanship as well as one of China Intangible cultural heritage.

The origin of silk figurines dates back to the Spring and Autumn period and the Warring States period. It gradually became popular in the Tang Dynasty and finally prevailed in the Northern Song Dynasty. Its production process is complicated, requiring choice silk, silk cloth, silk thread and spun silk as raw materials, and through more than a dozen delicate manual procedures such as carving, painting, dressing, hairdressing and making accessories, it can be made into vivid and exquisite silk figurines.

The same day, Meng Li and Ma Zhuoran visited the Silk Figure Museum. Looking at the figurines through the glass, they could see the delicacy, softness and liveliness of them. There are goddesses who fly and play musical instruments, eight immortals who talk together; Guan Yunchang standing with a knife. There are also historical figures Du Liniang and Yang Gui Fei, who are so lively that they sing melodiously… These silk figurines are so realistic as if they were real.

“Unlike plastic barbie dolls, which can be mass-produced, beijing Silk figurines have a long history and a complicated production process. More than a dozen steps of the craft need to be done by hand.” Tang Yan explained to Meng Li and Ma Zhuoran who were amazed by the vivid figures.

Later, they made a tiger head hat by themselves, the headgear of the Tiger Year doll.

The tiger hat is like a baby tiger, and the two international students have to make a baby tiger by themselves. Having the tiger’s ears, eyes, nose and other parts ready on the table, they use hot melt glue to glue them one by one to the bare hat. When gluing all the pieces together, make sure the baby tiger is happy and never give it a sad face.

Looking at the self-made tiger hat, Meng Li felt it was magical and interesting, but also difficult and tedious. “The finished product of the tiger hat looks very delicate and charming, but I did not expect it to be so complicated. I saw children in China wearing tiger head hats during the Spring Festival, which makes them look cute and energetic. Still, I’m amazed that a tiger-headed hat from the silk figurine could be so delicately crafted considering its small size.”

After experimenting with production, Tang Yan introduced the improved manufacturing process of silk figurines by Tang Ren Fang Studio, which adopted plaster molding instead of traditional Baotou (cotton stuffed head) technology and the manufacture of clothing was also simplified, but still tricky. Other than that, the figurines are largely made in traditional craftsmanship.